The trustees have the legislative authority in the township and the fiscal officer has legally designated authority over all financial matters.

It is the responsibility of the fiscal officer to keep an accurate record of all township accounts and transactions.

The township fiscal officer has designated duties as specified in the Ohio Revised Code, such as accurately recording proceedings of the board to township trustees, i.e., keeping the minutes and numerous other ministerial duties.

In practice, the fiscal officer and the trustees must work together, particularly in fiscal matters, to remind each other what can legally be done. 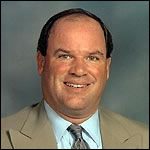 Prior to being appointed Fiscal Officer, Bud was a member of the Board Trustees in Plain Township since he was first elected in November 2005.

Bud is a self-employed Financial Consultant.  He has been in the financial services business since 1983.

(Please use PO Box for all correspondence)

Offices are closed on all weekends and federal holidays.

The Plain Township Aquatic Center will close on Wednesday, June 30th at 4 pm for the first swim meet ...

Due to summer conflicts, the evening board of trustees meetings for June and July were moved to the ...

The Plain Township Fire Department will remain closed to the public except by appointment. The Plain ...